Plastic pallets too hot to handle 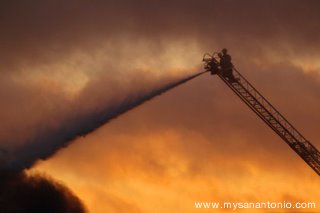 Last month a small warehouse fire in Lachine, Montreal, needed 25 firefighters to extinguish it. The fire appeared to begin in a part of the warehouse used to store plastic pallets. Although there were few flames, the fire produced plenty of black smoke.

Belching, toxic black smoke was the order of the day in a San Antonio, Texas, fire that happened back in August, too. This fire also involved plastic pallets, but the damage and cost was far worse. Over 120 firefighters, and 42 units attended the blaze, which took around six hours to extinguish and prompted the evacuation of a nearby hotel, as black, toxic smoke got a little too close for comfort.

As one firefighter who attended the blaze noted: “When it burns, it can burn at a higher temperature. Take a dense plastic pallet, and once it starts it will take a lot more to put it out.”

And while they are burning, plastic pallets are releasing copious amounts of dioxins into the surrounding atmosphere. Dioxins are the most potent synthetic carcinogens currently known to us. Need some perspective? How about this...

Dioxins are around half a million times more potent than arsenic

The eastern seaboard of North America, and in particular the corridor that stretches from Toronto to Quebec City, is one of the most industrialized regions in the World. As such, the area is home to a growing number of super warehouses. As companies carry less and less inventory, super warehouses are becoming more common.

Just imagine if a super warehouse full of plastic pallets went up in flames?

The truth of the matter is that even after the blaze has been finally extinguished, the poisonous fumes will render the area unsafe for a considerable period of time. And any perishable items saved from the fire would be useless.

While a super warehouse of wood pallets going up in smoke would hardly be a picnic, either, the potential for an environmental disaster would be greatly reduced—especially if the pallets contained in the warehouse were heat treated.

Heat treated wood pallets are chemical free, meaning if they burned, there would be no third party dioxins released into the atmosphere. Heat treated wood pallets; wood crates and custom wood packaging solutions are the sensible choice for risk-free competitive and International border compliant transportation of your company’s valuable merchandise.

HWP have been manufacturing and supplying superior quality wooden pallets and wooden crates for over 65 years. HWP is the closest wood-pallet manufacturer to the United States that offers heat treated packaging solutions. For more information, contact HWP today.