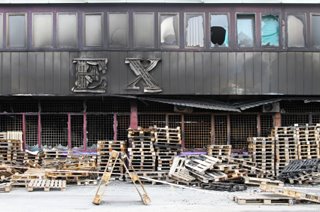 In May of this year, a massive industrial fire burned in Windsor Ontario.  Windsor Mayor, Eddie Francis, told residents of the city’s west end to stay inside and to close up their windows and doors, and not to use their air conditioners. A spokesperson for the fire department said that at one point, 75 per cent of the nearly 57,000 kg of plastic was burning at Sprucewood Industries, a plastic recycling facility. A huge plume of toxic black smoke could be seen across Windsor and parts of Essex County while the fire was blazing.
George Lucio, who lives near the scene, described the smell and the smoke as “toxic.”
He said, "I closed all the windows, turned off the air and kept the dog in the house," Connie Lucio said. "We were concerned."
Concerned to say the least! Fires fueled by plastics burn at a higher temperature and because plastic is much more dense than wood, and so it takes a lot more effort to extinguish it once it gets burning. Furthermore, when plastic burns, it is pumping out huge amounts of toxins known as dioxins into the air. Dioxins are incredibly toxic to all life and a potent carcinogen.
During the aftermath of a plastics fire, many of the salvageable items will later be discarded due to the toxic pollutants that infiltrate them from the smoke. After a plastics fire, the surrounding area is still loaded with carcinogens and other toxins that are harmful to our health and can leach into water sources and the soil.
Although any warehouse going up in flames would be a major problem, the risks associated with burning plastic pallets can be greatly reduced—by using natural alternatives like wooden pallets. The risks can be reduced further if the wooden pallets in the warehouse were heat treated.
Pallets are heat treated for several reasons, the main one being to sterilize them for transport. Due to ISSPM 15 standards, all international shipments must use certified sterile packaging to prevent the transportation of pathogens that cause disease and infestation of natural resources and living beings.
Heat treating wooden pallets also increases their strength and ability to withstand wear and tear. It also does not require the use of pesticides or other harmful chemicals so if the heat treated wooden pallets were to burn, they would not be releasing toxins from the burning of chemical additives.

HWP has been manufacturing and supplying superior quality wooden pallets and wooden crates for over 65 years. HWP is the closest wood-pallet manufacturer to the United States that offers heat treated packaging solutions. For more information, contact HWP today.
We’re able to serve clients throughout New England, Eastern Canada and the States. Give us a call!
Tweet